Here you will find your historic cruise

The Hohentwiel is a philosophy

Captain Adolf F. Konstatzky – closely associated with Hohentwiel for 30 years
Adolf F. Konstatzky has been working on the Hohentwiel since February 1990 and has been the captain and managing director of Hohentwiel Schifffahrtsgesellschaft m.b.H. since 1 January 2004. He sat down for an interview to look back on his career – and also talk about what the future has in store.

Mr. Konstatzky, the Hohentwiel is a very special place to work. Do any particular memories spring to mind?

We got a letter one day. In it, the children of a former Hohentwiel captain asked whether they were allowed to come to the Hohentwiel with their father and whether he could also visit the navigation bridge? Of course, we said yes. When the old man was at the steering wheel, he couldn't hold back his tears. He passed away shortly after. That was something that really moved me. Another incident from 2018 stands out to me: My brother-in-law Jee-Ho proposed to his girlfriend while on a jazz brunch cruise. She was completely overwhelmed – and said yes. Of course, there were many other encounters that inspired me: For example, when the actor Michael Fassbender came aboard the Hohentwiel to film and admired it very much. The shoots for the Bond film were also very interesting.

What were your early days like on the Hohentwiel?

We were a bold group with an incredible amount of drive. Every obstacle we faced simply increased our energy. So we started. In 1992, I qualified as a skipper, and by September 2003 I was a helmsman. “I'm retiring in January 2004. You can take it from here,” said Reinhard E. Kloser, the project manager behind the restoration and the first captain of the renovated Hohentwiel, one day in September 2003. It was actually too early for me. At the same time, I knew: I have to do it; there's nobody else. So I jumped into the deep end. I have to say: One of my biggest challenges was making the transition from employee to employer.

At that time, I set about establishing a corporate identity and expanding our trade fair business. Since I'm a fan of in-house solutions, I started to work in this direction with my team – this way, we have the best possible control over our output, i.e. what the guest expects. We brought sales to us, while also developing an increasingly broad portfolio of trips. And from 2011, we set up our own catering business.

Since April 2019, you have been working with another restored ship, the Oesterreich ... I see our future path in the synergies that result from this cooperation. With nine and a half employees in nautical science, I now have a staff that allows me to ensure a work-life balance for all employees. Previously, we had reached our absolute limit in terms of capacity utilisation. Now, we have room to manoeuvre again, and not just in terms of staff. The motor ship Oesterreich can do something that the Hohentwiel cannot: and that's sailing in winter. The people's leisure activities have changed; they want attractive offers all year round. This is possible with both ships.

Speaking of numbers. Do you know how many kilometres the Hohentwiel has covered since 1990?

Of course! Since it was recommissioned on 17 May 1990, the Hohentwiel has covered a total of 322,400 kilometres and transported 733,600 passengers across the lake.

Historical cruises are becoming an increasingly important attraction on Lake Constance. We operate the last remaining steamship from before the First World War and the first motor ship after the First World War under the label of "Historische Schifffahrt Bodensee". Both vessels complement each other perfectly. The Hohentwiel has become an integral part of Lake Constance, and the Oesterreich is also in the process of garnering a growing fan base. I could imagine that one day we might locate the passenger motor boats that the French took away as reparations. But that's something for the future. We promise our passengers that they will feel the very special spirit of the Hohentwiel. With that in mind, I would like to emphasise that I am extremely proud of my crew. All the members are extremely passionate and constantly strive to perform at their best to ensure our guests feel comfortable. The Hohentwiel is our joint project. It's not just a ship - it is a philosophy.

Thank you for the interview. 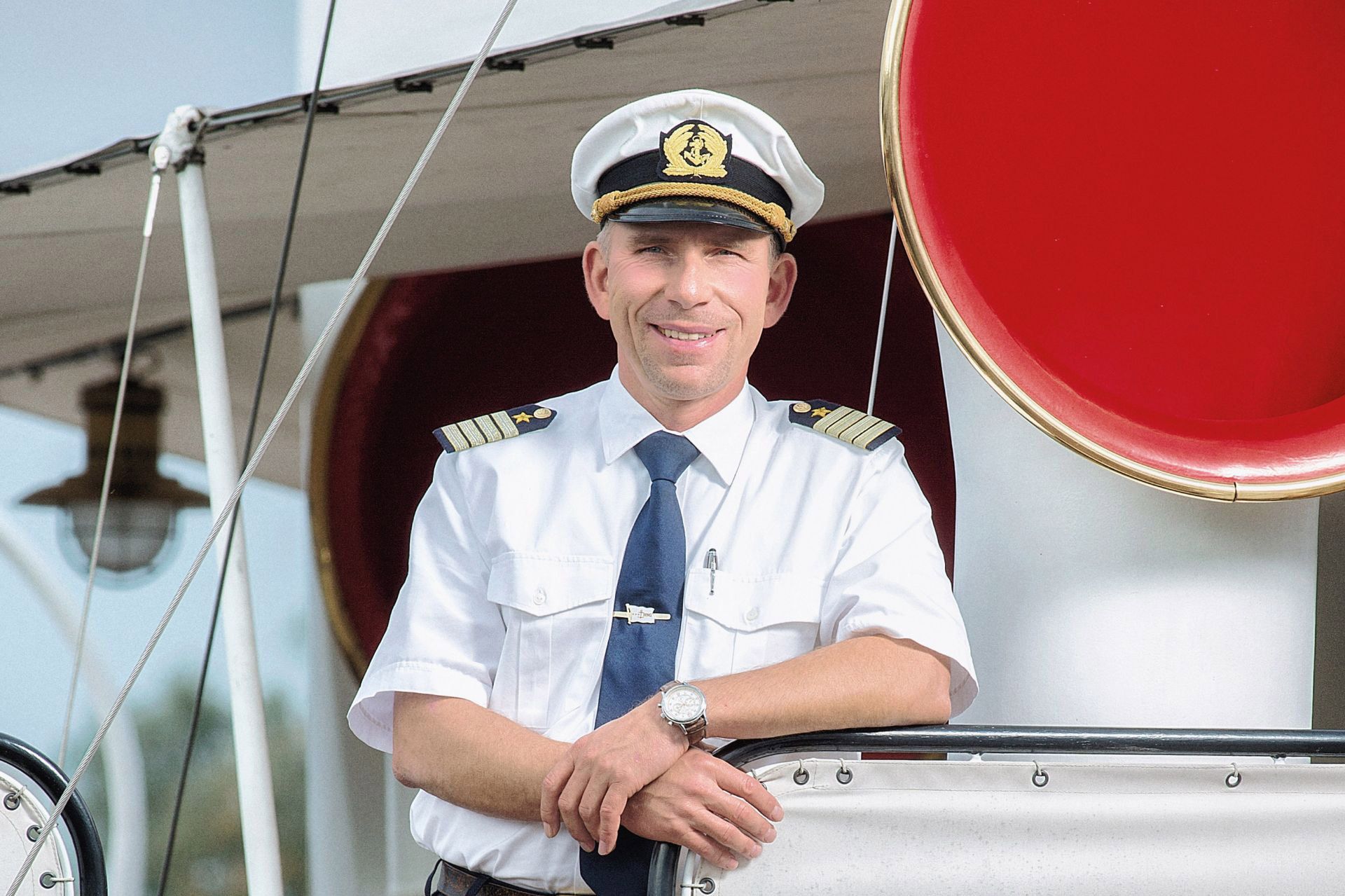 Captain Adolf F. Konstatzky has already carried out 5,274 trips on the Hohentwiel across Lake Constance, transported 733,600 passengers, travelled a distance of 322,400 km and has travelled around the world 8 times (as of the end of the 2019 season).

Shortly before the second maiden voyage on 17 May 1990, he first joined the Hohentwiel as a sailor. His training and experience as a boat builder made him a perfect new addition to the Hohentwiel team. The initiative to rescue the Oesterreich was spearheaded by Jürgen Zimmermann and Adi F. Konstatzky.

Konstatzky is married with 3 children.

Use our quick form for a non-binding enquiry and you will receive an answer or an initial offer from us back immediately.

Your team from Historische Schifffahrt Bodensee